Vinitaly 2019, Armando De Zan awarded with the “Angelo Betti” accolade for its outstanding role in the wine making industry. 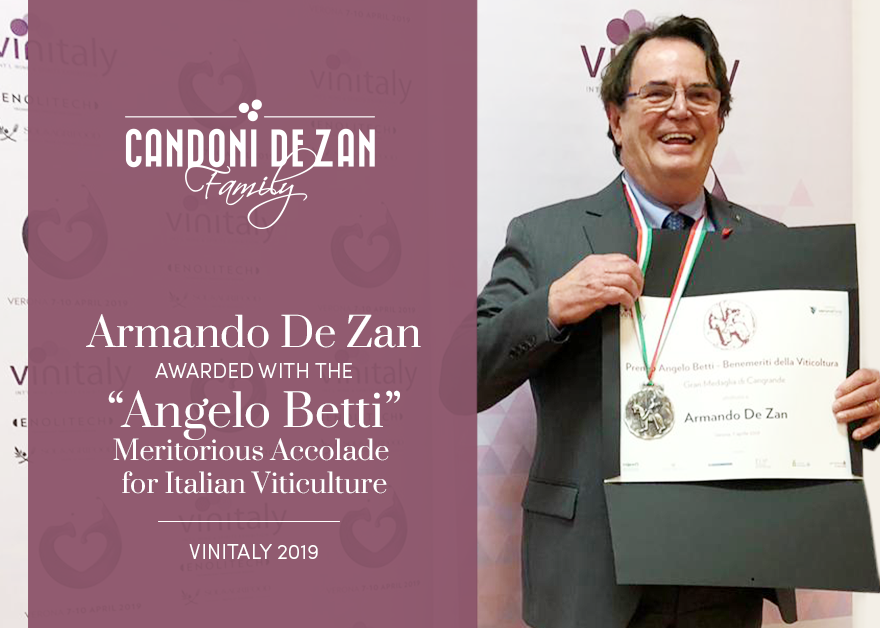 Vinitaly 2019, Armando De Zan awarded with the “Angelo Betti” accolade for its outstanding role in the wine making industry.

On the opening day of Vinitaly, now going on in Verona, Armando De Zan owner of Candoni De Zan Family Wines, was awarded the ‘Angelo Betti’ prize for Italian viticulture. Every year since 1973, this meritorious accolade is awarded to the great interpreters of the Italian winemaking world.

Alongside his family, his wife Elviana and daughters Barbara and Caterina, Armando De Zan has taken up the challenges to pursue continuous improvement and international success. Indeed, while remaining tied to traditions, Armando De Zan has created a state-of the-art winery which uses the latest and most sustainable agronomic and winemaking techniques to respect the environment, the local biodiversity and the territory.

‘I am very proud to receive this award’, says Armando De Zan, ‘I dedicate it to my family and to all those who work with us and help us make our company great and export the excellence of our territory all over the world.’

As indicated in the motivations of the award, despite the great international experience, Armando De Zan has always remained ‘deeply tied to the roots of his territory, the Eastern area of ??Veneto. In 2009, he contributed to enhance the local tradition and history by bringing back to its ancient splendors the seventeenth-century estate of the noble Venetian Polvaro Family in the heart of the Lison-Pramaggiore wine area, where he produces the great DOC and DOCG wines of the territory, such as: Lison Classico, Cabernet Sauvignon, Pinot Grigio and Merlot.’
Discover more about our brands Candoni, Carletto, and Tenuta Polvaro on our website.

Find a Store in Your Area >

or buy now on our e-shops: