Carnival in Venice is a one-of-a kind celebration suspended between past and present. The origins of this event go back to 1000 years ago. Inspired by the noble families in Ancient Rome, the noble “Patricians” of Venice, promoted this period of fun, jokes, and parties to please the poorest classes in society and diminish their discontent. Masks and disguises indeed helped erase class differences, even just for a short period of time.

In the 18th century, the Venice Carnival, had reached its maximum splendor and international recognition becoming prestigious all over Europe. However, from 1797, with the fall of the Venetian Republic and the arrivals of Napoleon first and the Austrians after, the tradition was interrupted for fear of rebellion and continued only in the major islands of the Venetian lagoon: Burano and Murano. Only in 1979, the century-old tradition of the Venice Carnival was officially reborn and went back to its famous and prestigious splendor.

2019 Venice Carnival is a tribute to the Moon and the fiftieth anniversary of the first moon landing.

“It’s because of the full moon. It comes too close to the earth and drives men crazy.”
W. Shakespeare-Othello

The moon is the essence of Carnival. With its different phases, the Moon has the same principles as the masked figures: to us it appears varied and mutable but it is always its same old self. It’s the greatest actress and seducer in the sky, and when it wants to fascinate us, it blushes!

Fifty years after the first moon landing, this year the Venice Carnival pays a tribute to the moon and the first man to step on its surface. Under the Shakespearean-inspired motto of “Blame the moon”, Venice Carnival brings together legends, myths, characters and masks from all over the world, with the big celebration taking place in St. Mark’s Square on March 5th.
Are you curious? Watch the celebration live here. 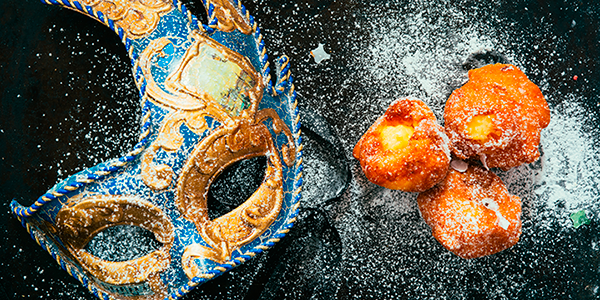 Carnival in Venice coincides not only with the appearance of masks walking along the streets, but also with the traditional sweets appearing all over the windows of bakeries.

During this period, bakers serve essentially two sweets, the “Crostoli” or “Galani”, thin ribbons of deep-fried duff pastry sprinkled with sugar, and “Frittelle” or “Fritoe”, as the Venetians call them. “Frittelle” are a typical leavened dough enriched with sultanas, lemon and grated apples, and then fried until they get gold and resume the typical rounded form that resembles that of the full moon!

But how do you prepare them? Well, harder said, than done!
To get you in the right mood, you should just relax, open a bottle of Candoni Prosecco and watch this video we have prepared for you!
Ready? Then let’s get started! Buon Carnevale! Cheers! 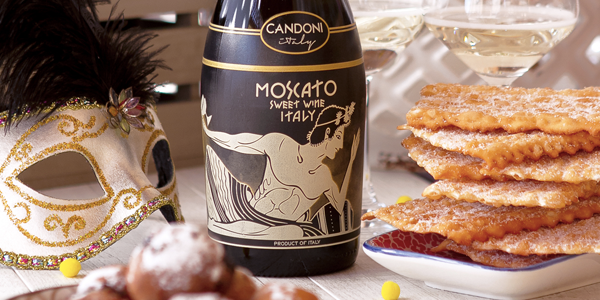 In a big bowl, add the following ingredients one at a time, mixing alternately between each ingredient: add the eggs, the milk, the acacia honey, the melted butter, the lemon juice, and the grated lemon zest. Make sure all is mixed well.

Then add the raisins which have already been soaked in Candoni Moscato for at least one hour. Make sure to drain the raisins well prior to putting into the mixture.

Again, add the following ingredients one at a time, mixing alternately between each ingredient Add the glass of Candoni Moscato, the rice flour, the all-purpose flour, and the yeast. Mix all well. (You can even use your hands to mix the ingredients)

Let the mixture rest for about 10 minutes and then move to the frying pan.
Take a spoonful of dough and with your finger push off the spoon into the oil. (Be careful to not put your finger in the oil.) Fry in vegetable oil heated to 360 degrees F. until golden, puffy and crispy. Drain on paper towels and then decorate with some powdered sugar.