In the United States, our conception of Mardi Gras is only as grand as the city of New Orleans. In Italy though, the celebration of Carnevale goes as far back as 1094, meaning that we are taking part in a tradition that’s nearly one thousand years in the making. In street parades across the Mediterranean countryside, Carnival is one of the best ways to experience Italian culture and cuisine. 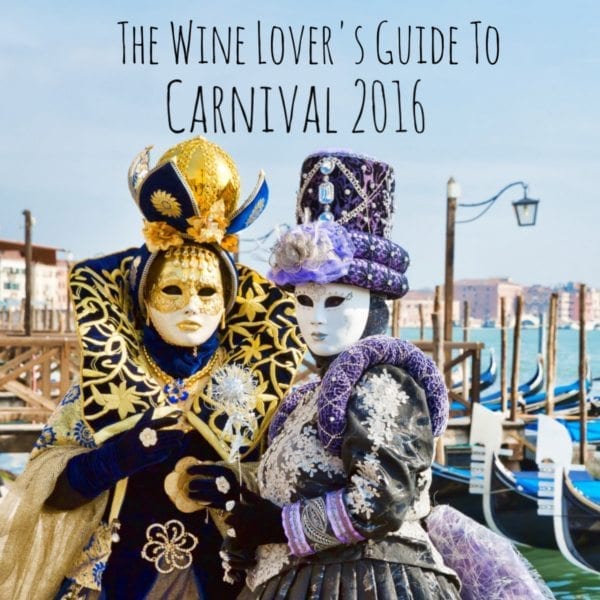 Historically, Carnival celebrations are based on the Catholic traditions of Lent and Ash Wednesday. Because Lent is a period of restraint and piety, the days and weeks leading up it are supposed to be filled with merriment. Per tradition, the days before Lent are to be celebrated with the sweetest of foods, tallest of glasses, and most extravagant of costumes before they’re no longer allowed. In other words, Italians like to get as much partying done before the calmer days of Lent.

The earliest accounts of Carnival come from Venice, with the tradition rapidly spreading throughout the country to the point where each region now has its own unique variation of the festival. This year, Carnival is officially celebrated between January 23 and February 9 (which is Fat Tuesday or Martedi Grasso in Italian).

Where To Go and What To Eat

Every city puts a different spin on Carnevale, so the experience can vary from one region to the next. The five cities below are considered the most quintessential Carnival destinations, offering the very best food and celebrations:

Carnevale di Venezia: From Venetian masks to ornate parades, Venice is the most famous place to experience Carnival. Gondolas and decorative boats line the city’s waterways, while juggling street performers and historic reenactments crowd the streets. Traditional Venetian masks, like the arlecchino or colombina, are popular during this time and famous around the world. 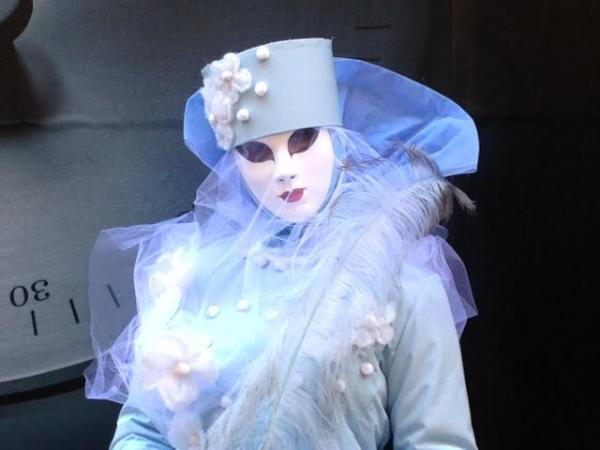 Carnevale di Ivrea (Piedmont): As the story goes, a young woman killed an Italian ruler many centuries ago, thrusting the town of Ivrea into a bitter civil war. Today, that same turn of events is reenacted with Italy’s largest food fight, The Battle of the Oranges. Participants are partitioned into different factions that compete against one another to demolish fruit and wreak citrus havoc upon one another. 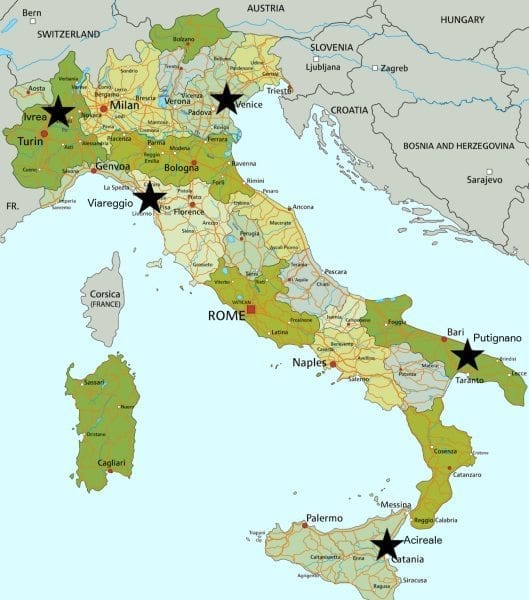 Carnevale di Putignano (Apulia): Putignano has been the center of the longest-running Carnival celebration in the world, continuously operating since 1394. This city celebrates Carnival longer than most, beginning festivities as early as December 26. The town’s Carnival celebration is best known for incredible papier-mâché floats and traditional Farinella (or joker) masks.

Carnevale di Viareggio: Nestled in the heart of Tuscany, Viareggio’s Carnival celebration is one of the most famous in Italy. The city’s iconic Viareggio Citadel is a 16-hangar megacomplex in the heart of the action, where engineers construct and show off enormous floats year-round. The city has a lively atmosphere even through the night, when after-dusk festivals, called rioni, fill the streets with live music and marching bands.

Carnevale di Acireale: On the island of Sicily, Acireale’s claim to fame is their intricate use of floral arrangements on each float. While most cities use only papier-mâché displays, this town adds a touch of natural beauty with sweet-smelling flowers as the focal point of parades. In an interesting move, Acireale residents often use kitchen utensils like pots and pans to make music in the streets during Carnival.

Make Your Own Carnival Drink

Can’t make it to Italy to celebrate this year? That’s no problem – you can celebrate right here at home with some recipes for Carnival’s most popular drinks. Grab a friend, a few glasses, and a bottle of wine and you’re part of the celebrations like everyone else (kind of). Follow the recipes below to see some of the most popular beverages to sip on:

This easy-to-make drink is a favorite among Carnival-goers because it blends the celebratory nature of sparkling Prosecco with the sweetness of fresh fruit. Here’s how to make it:

What doesn’t sound great about warm red wine? This drink is surprisingly popular during the colder months of January and February. According to Italian tradition, adding spices and heat to an old, unappetizing bottle of wine was also a great way to get rid of it before Lent. Today, this tradition is continued, not out of necessity, but because it simply tastes great. Here’s our authentic Vin Brulé guide:

Shrove Tuesday is less than two weeks away, which means that Italian Carnival celebrations are in full swing in many parts of the country. We always recommend traveling to Italy during this time of year because it is a truly unique time to experience Italian food, wine and culture. From the Candoni De Zan Family to yours, we wish you the happiest and healthiest Mardi Gras celebrations for 2016.