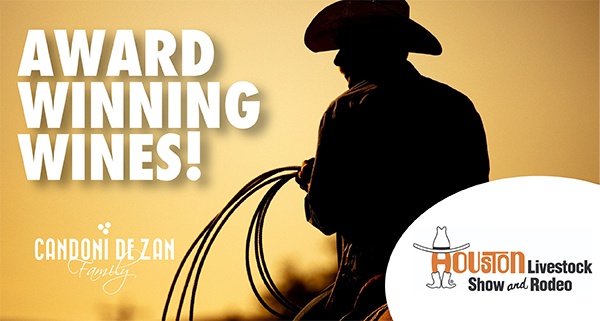 The Candoni De Zan Family is proud to announce that wines from our Candoni, Ricco, and Tenuta Polvaro labels have won a variety of medals at the 19th Annual Houston Livestock Show and Rodeo 2022 Rodeo Uncorked!® International Wine Competition.

This year, the esteemed competition was held November 12th-14th and featured 2,862 entries from 17 countries, including France, Spain, Israel, Peru, Argentina, South Africa, and Italy. At the close of the event, wines produced by the Candoni De Zan Family won a total of 13 medals.

In addition to the double gold, gold, silver, and bronze medals, our family was thrilled to learn that some of our wines were named Class Champion as well as Reserve Class Champion in three different categories! The full list of Candoni De Zan Family winning wines from this year’s event is as follows:

About the Candoni De Zan Family

The Candoni De Zan family has been involved in winemaking since the late 1800s and proudly specializes in traditional Italian wine made from organic grapes and sustainable practices. A culture built around quality and integrity was established by our forefathers and has been continued by successive generations. Our wineries are located in the Veneto region of Italy, where we own Tenuta Polvaro Estate, and in Piedmont, in addition to vineyards located in other regions of Italy.

A distinct “taste for the territory” and dedication to sustainability have always distinguished the Candoni De Zan family’s entire approach to winemaking. Our wines are the fruit of an enological project that emphasizes native grape varieties, which are a pure expression of their territory and transmit a unique and inimitable personality to each of our wines.

Winning these awards is an accomplishment that we do not take lightly. We will continue to work hard to produce our delicious, award-winning wines. We can’t wait for you to fall in love with the flavors as we (and so many others) have! Use the map below to find a store near you that sells one of our family’s brands!